Toronto is widely regarded as one of the most multicultural cities in the world.  This is due to the astonishing fact that about half the city’s population was born outside of Canada.  Being the fourth largest city in North America, Toronto is also one of the safest in the world.

Downtown Toronto is one of the most densely populated city centers in North America and boasts some of the world's most modern yet revolutionary living with glass, metal and red face brick elements competing to be the face of the city.  This sprawling, modern city has no lack of variety and substance. Its size and habit of constantly re-inventing itself makes it hard to get to know Toronto in a short period of time, but it’s not what’s on the surface but what lies beneath that holds Toronto’s real charm. It’s all about the neighborhoods!  These “neighborhoods” are going through massive changes, however, as Toronto grows.  Toronto and its neighboring cities that make up the Greater Toronto Area (GTA) boast a population of nearly 6.5 million people.  This density and demand to be in the city center has, however, created significant challenges for the populace, most notably the cost of housing.

The GTA receives approximately 100,000 new residents a year, creating the demand for 40,000 + new units annually. Overwhelmingly, these new Canadians would prefer ground orientated housing, but with the shortage of these types of homes, we have seen an unprecedented market change and the resulting tremendous growth of the high-rise condominium market.

As house prices have skyrocketed over the last number of years in the GTA, affordability, and quality of living space have become serious issues.  The “middle class” and to a large degree, millennials are having to revise their expectations and outlook for their housing options, as well as the geographic areas in which to live.  Which is why there has been what appears to be a never-ending real estate boom in the GTA. In the past year alone, aggregate prices for the GTA grew by an average of 21.7%, going from $706,640 to $860,295.  This is not just for single detached homes but an aggregate of all housing, including town-homes and condominiums.

However, the news for potential homeowners is not all bad.  To give some historical perspective, April of 2017 is when the markets peaked in the GTA.  Toronto condominium prices averaged $518,879, and the average detached house sold for $1,578,542.  Since then, condominium prices have stabilized and plateaued, and with more inventory now available. The average detached house, however, sold for $1,355,234 in Toronto in September, more than $200,000 less than the peak in April.  Similarly, the GTA has seen a 15.8% reduction in house prices since the peak in April, so there is a correction taking place.

So let us explore some of the reasons for the corrections, and perhaps some semblance of sanity.  As with any panic situation, a number of buyers were driven by the desperation of perhaps being left behind and not being able to get into the housing market.  It was not uncommon for a listing to have 10-15 offers, often ridiculously over the listed prices.  No conditions were accepted by sellers, be they for inspections or financing.  But, as with any hot market, there is always a level beyond which buyers will not go, either through necessity or common sense.  And that is where the real estate market finds itself in Toronto and the GTA.

What many believe to have started the slowdown was the implementation of a foreign buyer tax of 15 percent on all buyers who are not legal residents of the province of Ontario or Canada.  In addition to the foreign buyer tax, a vacancy tax, and other measures, Ontario will also now require all new homebuyers to provide data in regards to their intentions when it comes to the use of their property, as well as having to provide documentation of their residency and citizenship status.

There was an immediate impact on the markets once this went into effect in May of 2017, especially on condominium prices and sales.  And as is common with people everywhere, when there is panic, whether euphoric or disastrous, people tend to quickly change their thinking.  We see this in political choices, the stock markets, items we consume, movies and music we flock to or ignore.  And real estate is no different, especially after reaching the ridiculous heights in Toronto. Another influencing factor is the spectrum of the first interest rate hikes in Canada in seven years.  For a heavily indebted and highly mortgaged populace, any inkling of further interest rate hikes can instill panic.  Or at the very least a cautionary approach. Many experts have suggested Canadians would not be able to handle their debt payments if interest rates were to normalize — something that appears to be starting already, with the Bank of Canada raising interest rates twice this summer as the economy grew faster than expected.

Which brings us to another factor that may be cooling off the red-hot GTA real estate market.  Canada's federal banking regulator, OSFI, has proposed a "stress test" for borrowers of uninsured mortgages, where the borrower puts 20 percent or more down. That follows a new rule introduced last fall which requires borrowers who put less than 20 percent down to pass a similar stress test.  It has been suggested that, if brought into law, this could result in a 21 % reduction in the home-buying power of Canadians, resulting in downward pressure on house prices.  All good news for home-buyers, but still far from affordable.

To counter the high cost of housing, Toronto and the GTA have seen a dramatic shift toward high-density housing.  As alluded to earlier, condominium prices remain fairly stable since they are the more “affordable” option for someone who cannot afford a detached or low-rise homes.   Average prices for condominiums are at $507,841 as of August 2017 and demand for them remains strong.  Condominium construction continues at a record and apparently unrestricted pace and shows no sign of waning.  Even traditionally “suburban” cities and towns are seeing the introduction of high-rise condominiums to their skylines.

While Toronto and the GTA have kept up with demand on the high-rise side, there has been an increased demand from millennials with young families who live in high-rise developments and are looking for more space than is readily available in many newer buildings. It all adds up to strong demand for ground-orientated housing, wherever it may be in the GTA, and there is virtually no readily available inventory. Hence the move to high-density low-rise housing.  As single-detached houses join the list of endangered species in and around the GTA, we have seen the emergence of new forms of high-density housing, made to survive this storm of rising prices and dwindling supply.  Almost to the exclusion of all else, we see frantic construction of mass complexes of stacked and other townhomes.  It is a win-win for some, as builders get to build cheaper and charge higher for what is offered, and buyers at least have a somewhat affordable option to get into real estate ownership.  And it may prove to be the way things unfold in the future as less and less detached home being built means that their prices will continue to rise, creating, even more, demand for lower-cost options such as high-density housing and condominiums.  Additional evidence of this can be seen in the markets farther outside Toronto and the greenbelt that has seen tremendous growth from those willing to commute longer to have ground-orientated housing. Markets such as Barrie, Alliston, and Innisfil have seen their populations rise substantially, with commuters putting added pressure on the transportation infrastructure to and from these areas.

Even farther from the GTA, the demand is having its effects. Builders in areas such as London, Stratford, Niagara, Belleville, Kitchener, and Guelph will tell you GTA buyers are an ever-increasing part of their market. With flex hours and the ability to work from home for many, a commute to Toronto once or twice a week is a small price to pay to get the homes they want and can afford.  And this lack of affordable housing has created a booming rental market as well.  Good rental housing is harder and harder to come by, and of course, rental housing prices have continued to increase.  It is something expats need to be aware of and understand the implications.  The chart below shows the costs for unfurnished and furnished rental housing in Toronto at the time of this writing. 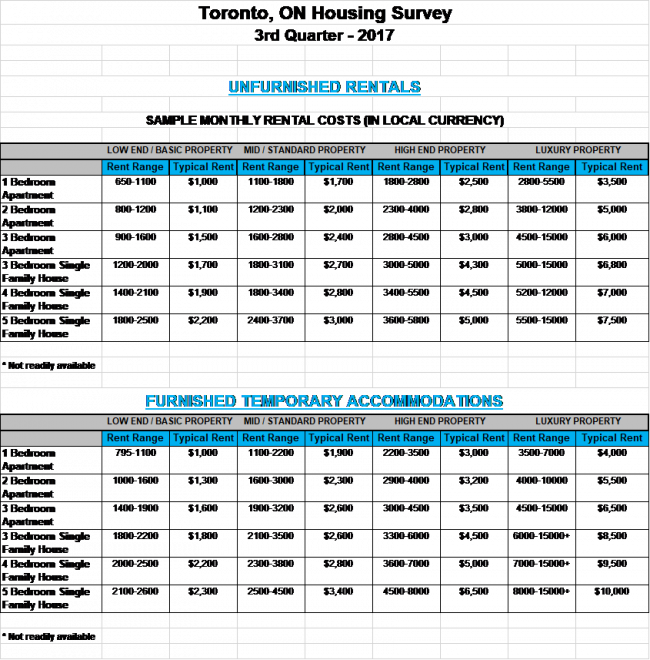 Lastly, it appears that much of the foreign investment that was going into Vancouver in British Columbia and Toronto and the GTA in Ontario was curtailed by the implementation of the foreign buyer’s taxes and is now headed to Montreal in Quebec which could be the next housing hotspot.  But more on that in a future article.