During his tenure, Joe has successfully attracted and empowered a steady stream of industry-leading talent. He has also embedded a relationship oriented culture he coined as Connect versus Control.

The morning after this past Thanksgiving (Nov 27, 2020), after again making a promise to never eat and drink “that much” ever again, I picked up a warm cup of coffee and slumped into my favorite living room chair, where I typically enjoy my coffee while scrolling through the various news and social apps on my phone. Yes, long-gone are the days of enjoying our morning coffee while reading the newspaper!

After quickly scanning a few sports-related news items, I opened a national news app and was stunned by one of the lead stories… Tony Hsieh had died. 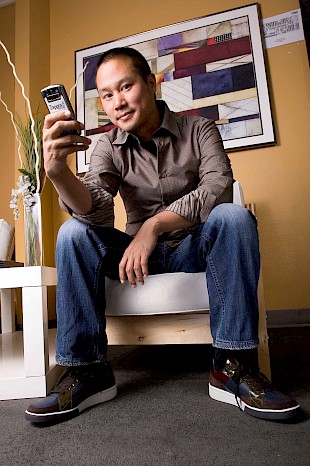 Less than 3 years after I joined Bristol in the spring of 2007, I had become aware of Tony.  I was still in the very early stages of crafting a company and more importantly, a culture, that I instinctively knew would be built to last and would lead to sustained success.  As I researched other companies and leaders known for their commitment to culture, my eyes – indeed my soul, were consistently drawn to a somewhat quirky and highly innovative man… Tony Hsieh.

The culture Tony helped create at Zappos, while certainly not perfect and perhaps, not applicable in the broadest sense, is nonetheless legendary.  As a leader, Tony was entirely uninhibited and endlessly fearless.  He was not only open to any and all ideas, but he was also completely comfortable with putting those ideas into practice.  Arguably, one of the most radical and transformative ideas Tony unleashed was his willingness to shift Zappos in the direction of an Holacracy culture, where all job-titles were removed.  The traditional role of team leaders and department managers were also removed, replaced by the concept of concentric circles where all employees were fully and equally empowered.  Such a radical idea took time in order to be accepted, embraced and made operational.  However, in the years that followed, Zappos routinely hit new levels of both financial, as well as customer satisfaction success, while also spurring stunning degrees of creativity.

Tony instinctively knew that true success could only be achieved when the “team” was operating at maximum performance.  That could sound rather cliché, but make no mistake, Tony was unflinching and his passion for creating the deepest levels of people-to-people connection helped take Zappos from a $1.6M company in 2000, to a company that by 2009 was producing in excess of $1B in annual revenue, attracting Amazon which later that year, purchased Zappos for $1.2B.

Beyond the sadness that flows from any tragedy, the irony here felt like a true punch to the gut. Tony Hsieh was, if anything, a person intensely committed to bringing joy and delight to family, friends, co-workers and customers. His path to immense success was paved by his complete embrace of the power associated with relationships and connections. And yet, in the many months leading up to his passing, reports indicate Tony began to isolate. He retired from Zappos as CEO in August and - just three months later - separation, isolation and erosion of the most important connections he long enjoyed appear to have conspired in ways which culminated in Tony’s untimely demise.

This protracted season of Covid, where we find ourselves living within the restrictive confines of a pandemic that can at times feel as if there is no end, has created a degree of isolation and separation most have never before experienced.  Professionally, great effort has been exerted to find ways of “being together,” as abbreviated and still distant those engagements remain… But personally, while we are not “doing what we do” in support of our profession, I often wonder about the impact of the imposed physical separation and the fullness of the departure from “normalcy.”  Undoubtedly, in this moment, as well as in the post-Covid years to come, there will be a great deal of time and study directed toward the analysis of the array of harm, physical and otherwise, brought upon us all by a lethal virus.

From the first time I encountered Tony Hsieh, I felt a spiritual kinship.  He spoke words and then put them into action, all of which deeply resonated with me and I would suspect, many of you too!  His story is a sad and stark reminder of the necessity for strong, reliable and mutually beneficial connections, both in and out of the workplace!

To be certain, 2020 was not only about pandemic-caused separation.  It’s safe to say that had there been no Covid, the social and political turmoil were working overtime toward their own respective contributions in the creation of historic division.  Sadly, families, friends and passing strangers all too-often found themselves on opposite sides of a vast array of issues, causing many to recoil and disengage from any shred of social interaction for fear of being dragged into yet another relationally-splitting debate.

The employee mobility industry has long been rooted in the very tenets Tony Hsieh espoused.  What we industry professionals have always known is that the success of the whole is good for each one of us.  In that sense, we are all in the same boat, rowing together toward the same goals…creating connections and delighting ALL of whom we encounter, in whatever context that encounter happens to exist.   As we bring to a close a month in which we honor and celebrate our Black brothers and sisters, the idea of togetherness and team…of CONNECTION, is all the more present on our minds.

So I submit this Cup of Joe as a tribute to Tony Hsieh and hopefully, as a reminder to fight for and be passionate about others… about relationships... and about creating and sustaining vital and perhaps, life-saving connections!

As always, I remain immensely grateful for all of you and the full spectrum of relationships I share with you as a friend, business partner, current and former co-worker, past and present client…  Thank you all and in the spirit of Tony, I pray we all can find deep joy as we travel our professional and personal journeys.