I was born into a very large, working-class Italian family.  My mother is one of 9 children and growing up, Sunday was indeed a holy day.  Not because we attended church, but because it was the day the army of aunts, uncles and cousins all gathered at my grandmother’s home.  I can still recall walking into her modest house in the culture and ethnic-rich neighborhood of Chickahominy, a tiny village within the borders of Greenwich, CT.  While dominated by multi-generational Italian immigrants, there were also plenty of families whose roots were found in other European countries such as Ireland, Poland and Germany.

The memories of those Sundays remain intensely vivid.  The scene when stepping into the house could easily have been a cartoon illustration with tiny Lena Vizzo, my grandmother, stirring pots that appeared to be twice her size, of boiling pasta water and fresh tomato sauce, alongside enough meatballs to feed the entire town, ready to be fried. My uncles would bring picnic tables into the kitchen/dining area and for hours on end the house would be filled with food and loud conversation!

As a young teenager, the world can seem as though it’s moving at the speed of light as we grow more aware of people and relationships locally and around the world.  Sunday at my grandmother’s home was always a reliable contributor to the plethora of events and memories being stacked deep within my mind and soul.

For many of us, 2020 has been the single-most confusing and challenging period of our lifetime.  Between the pandemic itself, the politicization of it and of course, the pre-election, election and post-election dysfunction, not to mention the unrelenting demands from our respective businesses, we have all been tested in ways we could never have imagined.  If you’re like me, you might’ve felt on more than a few occasions as though the world itself was beginning to fall off its axis!

The truth of course, is that we all must continue to forge ahead and make our way through the haze of uncertainty and unsettledness.  And so, it’s that reality that has brought to mind one particular memory from Sundays at my grandmother’s home.  One that perhaps this year, more than most others, is important for me to share.

I was 12 years old when, sitting down at the picnic table one warm summer Sunday, a very unique young man staggered into my grandmother’s home.  He proceeded to sit at the table right next to me. I instantly took note of this person who so comfortably and in an entirely uninhibited manner, strolled in and sat at our table as if he were family.

I quickly learned his name - Russell Boccuzzi.  Russell was likely in his late teens.  It dawned on me that this is the same guy I would see on a daily basis, walking up and down the steep incline of St. Roch’s Avenue each day.  What made Russell stand out from many of the other pedestrians was his unmistakable limp - an almost tortured way in which he walked.  His hands and fingers were extremely disfigured and while he was sitting next to me, it was clear he had virtually no ability to control them.

I discovered that as a young boy, Russell was struck by a car while crossing a street.  The incident left him permanently disabled.  Yet, each day he could be seen walking… and walking… and walking… He required special shoes that accommodated his mangled legs that were now asymmetrically sized.  So one shoe had a much larger sole than the other.  Because his eyesight was damaged in the accident, Russell wore large, thick, black-rimmed glasses that further distinguished him from others. As he sat at the table that hot Sunday afternoon, his polyester button-down shirt was soaked with sweat as walking for Russell was truly an immense chore.

When we finished eating, with some effort Russell took out a large note-pad.  He awkwardly snared a pen and began to scribble.

The next Sunday the same scene played out.  While it was impossible to merely gaze at Russell without being overcome by an overwhelming sense of pity (his condition and story was truly heart-breaking), I couldn’t stop. I marveled at his focus and his strength.  His perseverance was astonishing. The summer gave way to fall and then winter, and still Russell could be seen walking up and down St. Roch’s Avenue which even for able-bodied people represented a healthy dose of exercise. I came to learn that for more than a decade, this is what Russell did.  Always with a pained grin and an ever-present good, cheerful nature, Russell actually seemed at peace. 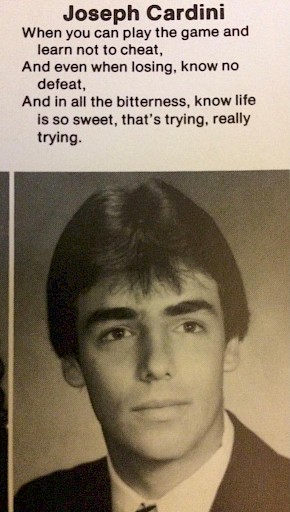 One particular Sunday I again found myself sitting next to Russell.  I asked him what he was writing in his large note-pad and instantly realized Russell was an incredibly gifted poet and story-teller!  He took the time to show me pages and pages of his work.  I was stunned.

At some point prior to my senior year in high school, Russell passed away in his sleep.  Prior to his death, he had given me a few pages from his note-pad, filled with his poems.  There was one poem that stood out among the rest.  So much so that I chose it for my senior quote in my high school yearbook.

<--- To the left is a snapshot that captures the poem.

I was amazed that after all he had been through and all he still battled, Russell would be so inspired to write these words.  As a young and self-centered teenager, Russell’s words served as an important lesson.

Throughout 2020, there have been many occasions where I felt the tug to play the victim role.  It would’ve been very easy to curl up and scream “WHY?”  Yet, the image of Russell walking, painfully, up and down St. Roch’s Ave would come to mind.  His selfless and inspiring words flashed before my eyes like a directional beacon in the midst of an historic storm.

If you are reading this, chances are you too have had to make decisions and choices regarding how you would navigate this period of time which has consistently placed a steady stream of hurdles in your path.  Be it at work, or at home, the calamitous impacts of 2020 knew no boundaries.  Important questions have been and will continue to be asked of us all.  Questions that are not only specific to adjusted business strategies and tactics, but individually.  As a person.  How have “we” navigated these tumultuous times?  What attitudes have we embraced?  What images have we portrayed?  In his relative short time here on earth, Russell battled unimaginable difficulty with a sense of purposeful grace that belied the pain and torture he endured.  He was the purest form of the definition of an overcomer.  If 2020 has taught the world anything, let it be that we too have the ability to choose steadfastness and purposeful grace.  In the spirit of the great poet, Russell Boccuzzi, let’s choose to be OVERCOMERS!