I wrote about a California summer vacation my family and I had taken and the amazing experience we had when we encountered Andrew, the elevator operator at The Hotel del Coronado.  In the story, I highlighted Andrew’s unique ability to relate to and connect with people, always leaving a memorable and highly favorable impression on all with whom he interacts.

In the weeks that followed my encounter with Andrew, I would often reflect on how one person could create such a memorable experience.  And in this case, how Andrew’s relational skills serve to enhance the hotel guest experience.  Indeed, The Hotel del Coronado is in possession of a highly effective memory-builder who, coupled with the multitude of other memorable aspects associated with the hotel, serves as a powerful force multiplier!

Approximately 60 days after my “Andrew Experience,” Bristol was about to engage in our annual strategic planning process, where we bring more than 20 managers and executives to Phoenix for two days filled with self-examination and reflection, validation of previously identified plans and goals, and the establishment of new targets and metrics for the coming year.  This event is a major component of our Malcolm Baldrige based Performance Excellence System and it truly encompasses every nook and cranny of our organization.

One of the most essential exercises of the session has been the identification and vetting of our organization’s Valued Behaviors.  They are a compilation of characteristics that we believe to be congruent with Bristol’s Mission and Vision, as well as supporting and strengthening our unique company culture.  In the weeks leading up to our planning session, I began preparing the remarks and key messages I intended to deliver throughout the meeting.  As my team and I reviewed our Mission, Vision and Valued Behaviors, I found myself thinking back to Andrew and the still powerful impression he had provided.  It dawned on me that so many of the behaviors we were targeting were neatly packaged in an elevator operator in San Diego!  It was decided that Bristol would establish an annual employee award, given to the person(s) who most exemplify our Valued Behaviors and in so doing, placed the best possible face on our company.  The award is appropriately named, The Andrew Award. 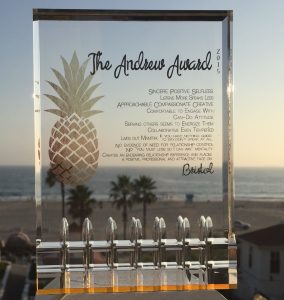 I decided to call Andrew’s manager to not only let him know how much my family and I enjoyed our encounter with Andrew, but to also mention the establishment of our new annual employee award.  I was forced to leave a lengthy voicemail. It just so happened that the hotel was holding their own all employee event shortly after I had made the call to Andrew’s manager… and to everyone’s surprise, the hotel General Manager actually played my voicemail in front of the hundreds of hotel employees that had gathered for their event!  Needless to say, Andrew was in shock.  In fact, I soon received an email from Andrew’s sister (with whom he lives), that included a hand-written note from Andrew himself, thanking me for providing him with the unexpected honor of choosing his name for such a prestigious award.

Fast-forward a year later.  My wife and I were trying to decide how to celebrate our 25th wedding anniversary.  Earlier in the year, Dennis Decot, Bristol’s Manager of Business Process, and one of the inaugural winners of our Andrew Award, paid a visit to the Hotel del Coronado.  As fate would have it, he saw Andrew and mentioned how we he had won the award named for him!  I later received an email from Andrew’s sister containing another handwritten note from Andrew.  In it, he again mentioned how shocked he is that a company would choose to name an award after him, and how proud he was to meet an actual winner.  He sheepishly asked if I would take a picture of the award and send it to him.   I replied to his sister saying that I believe we can do better.  I informed her that my wife and I chose to spend our anniversary at the hotel and that I would bring the award with me so that while there, I could present it to Andrew.  On August 31st, my wife and I were heading out of the hotel to celebrate.  But I also chose this night to deliver our company’s Andrew Award to the legend himself.  When my wife and I walked onto the elevator, I mentioned to Andrew that I had a gift I would like to share with him.  The elevator stopped at the lobby level and Andrew asked a fellow employee to take over while he came with my wife and I.  I took out the award and explained to Andrew the meaning behind it.  He was speechless. A few seconds passed and he grabbed my arm and began to parade me around the hotel, showing off the award and asking me to explain the meaning to everyone. 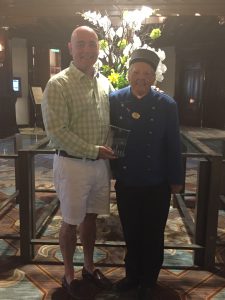 And so Andrew the Hotel Operator will now be annually memorialized as worthy Bristol associates receive our company’s most prestigious honor.  Additionally, my family and I have gained a new, life-long friend and for that, we are deeply grateful and humbled by this entire experience.  It’s yet another important reminder of what drives the most powerful personal and business successes – People, Relationships and Connecting!

If you ever have the good fortune to be staying at the Hotel del Coronado, be sure to ride the elevator and enjoy the opportunity to engage with one of the most kind-hearted and funny individuals you will ever come across.  I’m quite certain you will never forget not only your stay at the hotel, but your interaction with Andrew as well.

For all of us at Bristol Global Mobility, it’s that type of enduring relational experience we seek to achieve with all of you!