People often ask: Why do we celebrate Black History in February? 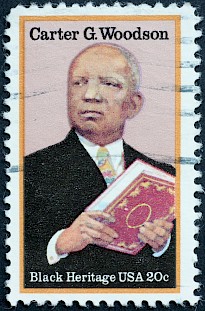 Carter G. Woodson (1875-1950) was a distinguished African-American writer and historian known as the 'Father of Black History.' He penned the influential book 'The Mis-Education of the Negro' which challenged African-Americans to better themselves and all of society by thinking and acting beyond the rote 'indoctrination' of the status-quo educational system. Dr. Woodson was the second African-American to receive a doctorate from Harvard (after W.E.B. Du Bois).

Dr. Woodson believed that Black Americans - and all Americans - should know their past in order to participate intelligently in society.  He lobbied schools and organizations to participate in a special program to encourage the study of African-American history, which began in February 1926 with Negro History Week. The program was later expanded and renamed Black History Month. Woodson had chosen February for the initial weeklong celebration to honor the birth months of abolitionist Frederick Douglass and President Abraham Lincoln.

Did You Know?  10 assorted facts about Black History and the people who made it:

Claudette Colvin (b. 1939) is a civil rights activist who, at age 15 and nine months before Rosa Parks, refused to give up her bus seat to a white passenger. She was arrested and became one of four plaintiffs in Browder v. Gayle, which ruled that Montgomery's segregated bus system was unconstitutional. Colvin later moved to New York City and worked as a nurse's aide. She retired in 2004.

Robert H. Lawrence Jr. (1935-1967):  Chemist and scholar who in 1967 became the first Black man to enter training as an astronaut. When asked if his selection was historic for race relations in the U.S. Lawrence answered "No, I don't think so. It's one of the things we look forward to in civil rights - normal progression."  Sadly, Lawrence died in a jet crash during flight training and his opportunity to travel into space was cut short.

Garrett Morgan (1877-1963):  With only an elementary school education and son of an enslaved parent, Mr. Morgan was a prolific Inventor who came up with several revolutionary products including an improved sewing machine and gas mask. However, he is perhaps best remembered for his design of the "three-light" traffic signal in 1923, rendering obsolete the previous two-light system while contributing mightily to safety and efficiency on our roadways. (A reminder: the yellow light does not mean accelerate!) 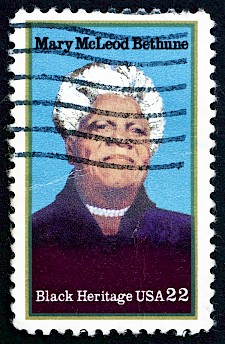 Mary McLeod Bethune (1875-1955): educator, stateswoman, philanthropist, humanitarian and civil rights activist. Among her many accomplishments she was appointed as national adviser to president Franklin D. Roosevelt with whom she worked to create the Federal Council on Negro Affairs (or "Black Cabinet"). She founded a school for Black students in Florida that today bears her name as Bethune-Cookman University.  In 1938 First Lady Eleanor Roosevelt challenged the segregation rules at the Southern Conference on Human Welfare in Birmingham, Alabama, so she could sit next to her friend Mary, to whom she would refer to as her "closest friend in her age group."  In 1985 the U.S. Postal Serice issued a stamp in Bethune's honor.

Wally Amos (b. 1936): Before delighting the world with his "Famous Amos" chocolate chip cookies, he was the first Black talent agent at the William Morris Agency where he signed Simon & Garfunkel, headed the agency's rock and roll department and represented such giants as Diana Ross & the Supremes, Sam Cooke and Marvin Gaye. In addition Mr. Amos is a lifelong literacy advocate, having authored ten books and hosted the TV show Learn to Read.

Maya Angelou (1928-2014):  The famous poet, author and civil rights activist's birthday is April 4, 1928.  When her close friend Martin Luther King Jr. was assassinated on that day in 1968, Angelou stopped celebrating her birthday, instead sending flowers to King's widow Coretta Scott King each April 4th for more than 30 years until Coretta's death in 2006.

Alexander Miles (1838-1918): A member of the National Inventors Hall of Fame, Miles invented automatic elevator doors in 1887, reportedly after his baby daughter nearly lost her life falling down an open elevator shaft. He took it upon himself to develop a solution, patented his mechanism that automatically opens and closes elevator shaft doors, a design which is largely reflected in elevators used today.

Madam C. J. Walker (1867-1919) is recorded in the Guiness Book of World Records as as "the first female self-made millionare in America” making her vast fortune through her homemade line of hair care products for Black women which became a global multi-million dollar business employing thousands of women. Born Sarah Breedlove to parents who had been enslaved, she was inspired to create her hair products after an experience with hair loss, which led to the creation of the “Walker system” of hair care. She is further known for her great philanthropy, activism and as a patron of the arts.

Josephine Baker (1906-1975): Among the most celebrated dancers and performers of her time, Baker is further known and admired for her actvitities in support of the French Resistance during World War II and her later civil rights activism.  Born in St. Louis, USA, she later expatriated to France and became a French citizen. During the war, she famously smuggled military intelligence to French allies, pinning secrets inside her dress, or hiding them in her sheet music, taking advantage of her star status and extensive travel as a world renowned perfomer while risking her life for the Allied cause.

The above only scratches the surface of the deep and lasting contributions of Black Americans that have shaped our history and society.  Let us take Dr. Woodson's message to heart this month and always: to never stop learning in service to ourselves and each other.

We thank Andrean Cunningham, Bristol's Director of Finance and Accounting Services, for her concept and contributions to this article.