The Russians began advancing into Kazakhstan in the 18th century and by the mid-19th century, they ruled all of Kazakhstan as part of the Russian Empire. Kazakhs are a Turkic people, with early influences from the Persian and Arabic Islamic cultures, as well as European.

Kazakhstan was the last of the Soviet Republics to declare independence following the dissolution of the Soviet Union in 1991. During the Soviet period, Kazakhstan was known as the “People’s Friendship Lab” due to its multi-ethnic population and high level of tolerance. The challenge of Kazakhstan’s leadership after its Soviet independence has been to revive Kazakh culture and reaffirm the principles of friendship, which has guided Kazakhstan’s nationhood for centuries and they have succeeded in doing so. They have been able to preserve and further developed some of the most positive legacies of the Soviet Union, all while maintaining the Kazakh traditions.

Kazakhstan is truly one of the most ethnically and religiously diverse countries in the world, even if the majority of the population is Muslim. This is owed in part to its geography, situated in-between the major world religions. Today’s Kazakhstan is a modern culture, thriving in the post-Soviet era. Modernism and traditionalism co-exist and Kazakh identity is a product of this and external cultural influences. The traditional Kazakh lifestyle has blended with influences from Western societies as well as those from Kazakhstan’s Russian and Chinese neighbors to create their culture of today.

The name “Kazakh” comes from the ancient Turkic word qaz, “to wander”, reflecting the Kazakhs’ nomadic culture. The Persian suffix stan means “land” or “place of”, so Kazakhstan can be literally translated as “land of the wanderers”. And what a land it is. It is the world’s largest landlocked country and the ninth largest country in the world.

You may actually find some of the traditional cuisines of Kazakhstan, un-appetizing. For hundreds of years, Kazakhs were herders who raised sheep, Bactrian camels and horses, relying heavily on these animals for transportation, clothing and food. As a result of this way of life, the horse is commonly eaten and is in many dishes. It could very well be viewed as the meat of the country as it is used so often. However, if you are not game on trying horse, you can also find dishes of lamb and cow.

If you are up to eating what the natives eat, you can try a simple yet traditional appetizer of sliced horse meat served with flatbread. There is a dish, manti, comprised of steamed dumplings stuffed with seasoned mutton or horse and bits of pumpkin sprinkled with hot pepper. Another traditional feast is beshbarmak which literally mean “five fingers” as it is meant to be eaten with the hands. Beshbarmak is boiled horse and lamb served on top of thick noodles. Often, it is served alongside a greasy bowl of mutton stock called sorpo.

Some typical beverages that you will find are kumys (horse milk), or other dairy drinks such as shubat (made of camel milk) or ayran (made of cow milk). If you are looking for something sweet, take delight in yespe baurska. These donut hole look-a-likes are delicious puffy fried bread that is served on special occasions all over Kazakhstan. It is said that the smell of the oil and the frying baursak floats high into the sky so that your dead loved ones can feed on the aroma and enjoy them with you.

Places to Go, Things to See

Kazakhstan has experienced an architectural renaissance following its independence, with the construction of numerous remarkable buildings in a mixture of Islamic, Turkic, and European influences. One of the more popular areas in Kazakhstan is Almaty. It is situated in the southeast amongst a beautiful setting, between mountains and plains. It is the largest city in the country and boasts modern architecture, wide streets, cool fountains, parks and squares, and spectacular mountain views, particularly in spring and autumn. The city has plenty of business centers, theaters, museums, art galleries, exhibition halls and a wide selection of modern entertainment complexes that include movie theaters, casinos, nightclubs, parks, and restaurants.

After you have settled in, it will be time to go see some sights. First, The National Museum of Kazakhstan in Astana. Located in Independence Square, it harmoniously blends into the architectural ensemble with the Қазақ Елі monument, Independence Palace, Palace of Peace and Harmony, the Hazret Sultan cathedral mosque and the National University of Arts. While you’re there, make sure you see them all.

If you are in the capital city, Astana, visit the Nur-Astana Mosque. The Nur-Gasyr Mosque signifies the divide between the old city and the new city. The Orthodox Church and the Mosque were opened together as a show of religious solidarity by Russia’s and Kazakhstan’s presidents. During your exploration, stop and see the beautifully designed Nazarbaev Park. It was opened in honor of Kazakhstan’s current president.

Another spectacular site is the Bayterek Tower. This monument and the observation tower has become the symbol of the capital of Kazakhstan. This popular venue hosts an observation deck, art gallery, a large aquarium and a restaurant as well. The Palace of Peace and Harmony is pyramid type building in Astana. This beautiful structure is visible from the both coasts of Ishim. It was constructed to host the Congress of Leaders of World and Traditional Religion and houses a 1,500-seat opera house.

Kazakhstan’s nature is also a major attraction. A short drive from Almaty, you will find a picturesque valley of Medeu. It has one of the largest and unique speed skating rinks in the world. Medeu Stadium houses and Olympic-sized ice stadium at almost 6,000 feet above sea level making it the world’s highest skating rink. Many of the world’s top skaters have come here to test their skills. The countryside of Kazakhstan is without a doubt, like a scene from a movie. Take trekking in Jungar Alatu for example, or Burabay National Nature Park. Famous as the pearl of Kazakhstan, the park is situated in the north of the Akmola region. The park has 14 large lakes. It is a home for 800 flora species and about 305 vertebrate animal species. The park offers stunning beauty and a rare harmonic combination of mountains, forests, lakes, flora, and fauna.

The Zailisky Alatau mountain range offers winter sports such as skiing and snowboarding at the resort of Shymbula. These mountains are also fantastic in the summer months for trekking and climbing. The nearby Kapshagay reservoir has perfect for some relaxing on its sandy beaches and a little swimming. Sharyn Canyon, which rivals the Grand Canyon in its beauty. The famous singing sand dunes in the Altyn-Emel national park are unusual but must see attraction.

In winter, Astana has an ice town where you can speed down ice slides and see the Taj Mahal, Big Ben, the Eiffel Tower or the Acropolis, all constructed from blocks of ice. A few hours, drive from Astana is the scenic Lake Burabay, which is surrounded by dense forest and has unusual rock formations. Another nearby lake, Tengiz, has the world’s most northern colony of pink flamingos.

The prominent language of Kazakhstan, Kazakh, is a Turkic language spoken in Kazakhstan, Russia, and China. Russian is also spoken. For a short stay, you can get by with speaking Russian in the main towns and cities, but if you’re planning on staying long, you may want to consider learning Kazakh. Here are a few sayings to get you started:

Kazakhstan’s culture of openness and tolerance, in many ways, is at the core of the country’s post-Soviet development model. Hospitality has always been a distinctive feature of the Kazakh nation, and therefore, guests are always given a warm reception and the best seat in the house. In general, most people in Kazakhstan have a great tolerance of other cultures. But if you are visiting or relocating, it helps to get a start on understanding the attitudes of the locals. The Kazakhs are an extremely friendly people. If you are a guest in a Kazakh home evenly unexpectedly, you will be received as if you had been invited. The principles of respect for guests and elders as well as peacefulness and tolerance are instilled in every Kazakh and are staples of behaviors in Kazakh culture and tradition.

In public, displays of affection or other emotions are more acceptable especially among people of the younger generation, which tends to be more relaxed than older people who might have been raised under the strict rules and taboos of a Soviet system. Touching is not acceptable in formal settings, especially between the members of the opposite sex and might be viewed as unwarranted familiarity. As a rule, handshakes are more typical for men than for women. It is also customary that if you see a lady is carrying a bag or getting off the bus, it is impolite not to offer a hand. But then again, manners like this should be applied no matter what country you are visiting.

A Bristol Associate in Kazakhstan

Bristol’s very own Martin Foxwell, Senior Vice President of Global Service Delivery, has a very special, personal connection to Kazakhstan. Martin and his wife traveled to Kazakhstan in February 2002 and spent two weeks in the final stages of their seven-month adoption journey in Almaty where they adopted their son, Ian at 22 months old. As Martin remembers, “Through that wonderful winter season, as we arrived to become parents for the first time, we enjoyed so much of the city, its people, and beautiful surroundings. I was expecting to encounter the remnants of a dull “Soviet” culture only a decade into their independence. However, I was somewhat surprised at the modernity of Almaty:  A well-laid out city full of parks and wide avenues; the immense architecture adorned with neon and colorful signage; the vibrancy of the stores, restaurants and bars seeming to reflect an emerging commercial and entrepreneurial post-Communist spirit. I was also immediately struck by the beauty and confidence of the Kazakh people, the stylishness of the women, and the overall friendliness and hospitality of everyone with whom we were in contact. The baby house where Ian had been raised was loving, well-funded and efficient”. 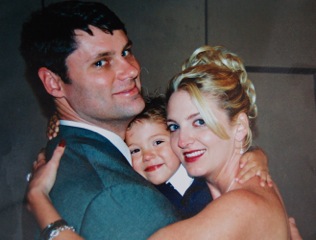 On the business side, Kazakhstan is home to a considerable western expatriate population due to the presence of several industries, including the energy sector. In his position at the time as director for a major international compensation consulting firm, Martin had the opportunity to meet with the local business community and get some consulting work done, validating the firm’s data collection processes and discussing the needs of the local client base.

Martin and his family were also able to take part in some fun festivities while there. Martin fondly remembers the snow-capped mountains of the Kazakh countryside and the ice skating stadium in Medeu that they visited, along with sledding, horseback riding and the interesting experience of dining in a Yurt. Although Martin cannot remember exactly what he ate at that dinner, he is certain it was not horse!

“While I have not had the opportunity to return since 2002, it is definitely on our agenda for the near future as Kazakhstan is a homeland of sorts, and my son’s curiosity over his birthplace continues to grow.”

You will never be a stranger to a Kazakh. Regardless of where you call home, Kazakhs will take you in and treat you as one of their own. In this respect, Kazakhstan stays true to its culture of tolerance and openness in learning from and accepting others. And during your time there, with an open mind, you can too.