The past and present harmoniously existing within steps of each other best defines Rome’s culture. As one of the most historic cities in Europe, it is easy to see why many flock to it. With museums and monuments of the great Ancient Roman Empire to modern restaurants and attractions, Rome has helped make Italy the 4thlargest national economy in Europe. Known as a center of arts and culture, more and more expats are gladly making it their new home.

When traveling to a new country, learning the language is helpful when interacting and working with the locals. Although you may not know the language at first, here are some key phrases and words to get you started when you arrive:

Expats should be aware that although Italian is spoken by 93% of the natives, there are a number of dialects of the language including Sardinian, Neapolitan, Sicilian, and Venetian, to name a few.

Rome is one of the most historically known cities in Italy. With millions of tourists visiting every year, you will find many attractions to entertain you. With its multiple museums and monuments, being in Rome gives you the feeling of traveling back in time to the great empire that once was.With their year round temperate climate, the availability to visit outdoor attractions all year long, will be a breeze.

There are many Ancient Roman sites you can visit like the Colosseum, which once held great gladiator fights and animal hunts and is visited by more than 4 million people yearly. But there is more to see than just the Colosseum. There are no shortages of different historical sites to visit including, Circo Massimo, Via del corso, the Pantheon, Altar of the Fatherland, Spanish Steps, Trevi Fountain, Piazza Novona, Plazza de Popolo, Villa Borghese, and the Vatican.

In the mix of ancient ruins, Rome is right in line with all the comforts of modern times. They have a Burger King, Apple Store, Foot Locker, and Game Stop…to name a few. Not only canyou get a taste of the Italy from years past, but you can also have some comforts of the modern world.

Naturally, soccer is the main sport and rugby is becoming more popular. Harness racing, closely related to the chariot races of the past, is a favorite past time of the locals. If you want something a little more familiar, golf and surfing are gaining in popularity amongst Italians.

With an average of 30 festivals in Rome per year, there is no shortage of opportunities for an expat to learn the culture and history of the city and country. The springtime festival of The Sagra del Carciofo celebrates the artichoke, a staple in traditional Italian cooking. Festa di San Giovanni, a festival of in honor of Saint Giovanni can find locals and expats alike enjoying lumache in umido (stewed snails) and porchetta (roast suckling pig), while enjoying a candlelit procession to San Giovanni in Laterno led by the Pope.

The birthday of Rome, Natale di Roma, is a grand party and to celebrate Romebeing “born” in 753 BC, an enormous fireworks display is set off.

Holidays are also highly revered and held to old world traditions. On Easter Sunday, an outdoor mass takes place in St. Peter’s Square. During the Christmas season, churches in Rome display elaborate nativity scenes unlike any you will find elsewhere. The traditional midnight mass at the Vatican attracts thousands of locals and international visitors.

Rome, with its 15 boroughs, offers a range of unique and culturally rich neighborhoods. With many different options, expats are able to find their home away from home. Younger expats may tend to gravitate more towards the areas of Prati, Testaccio and Trastevere. Trastevere is one of Rome’s most popular neighborhoods and a favorite among the younger locals. With many pubs, shops, cafes and a popular night life, you will be able to find a place to relieve your stress from the work day and unwind. Trastevere is also home to a variety of authentic Italian restaurants, such as Pianostrada Laboratorio di Cucina to satisfy your hunger, as well as several academic institutions including The American University of Rome.

If the hustle and bustle of the nightlife and busy, trendy shops isn’t for you, other neighborhoods such as Aventino, Monteverde and Balduina might be more appealing due to their relaxing atmosphere.

Living in Rome can also be surprisingly within budget. Currently the cost of living in Rome on average 27% lower than New York, for example. This gives expats the opportunity to save some extra money and also allow them to comfortably afford living while they are abroad. Costs of living (without rent) for a single person is an average of $813 monthly, while for a family four you could expect your costs to be around $2,800 monthly (without rent).

Eat and be merry!

You might be hard pressed to find any expat who doesn’t love Italian food. No one area of Italy eats the same things as the next. Each region has its own spin on Italian food…which means, more new flavors to savor!

Most of the foods that Americans view as Italian, such as spaghetti and pizza, come from central Italy, the region including Rome. In the North, fish, potatoes, rice, sausages, pork and different types of cheeses are common ingredients. Pasta dishes with tomatoes are popular here as well, as are many kinds of stuffed pasta, polenta and risotto. In the South, dishes are dominated by tomatoes, either served fresh or cooked into sauce and also heavily includes capers, peppers, olives, garlic, artichokes, eggplant and ricotta cheese. Either way, even if you venture out of Rome to explore, expats will surely find incredible food everywhere.

People in Rome and Italy in generally are very laid back. A typical work day can begin around 10 am. Your lunch (“pranzo”), is typically the main meal of the day, followed by a nice little “riposo” (“nap”). You can definitely see how the Italians take each day with the mindset of not always being in a rush, as might be typical in other cultures abroad.

When moving overseas, it can be a stressful experience trying to find your place in your new location. But with more and more expats traveling to countries all over the globe, many different groups have been formed to make moving to a new country an exciting experience for expats so that they can feel comfortable with their new surroundings while giving them the opportunity to meet other people in their new communities. Sites like, http://www.expatslivinginrome.comare a useful social media tool for expatriates living in Rome. This site provides links to connect you to classes to learn Italian and holds weekly events where you can meet fellow expats who are also living and working in Rome. A bonus point is that it’s free!

Rome is undoubtedly one of the biggest tourist destinations in Italy. With history at every corner and no shortage of events, sights, and friendly locals, every expat will have the time of their life and be comfortable in their new home away from home. With the help of Bristol’s team, your transition to moving and living in Rome will be as easy as pie…make that cannoli. 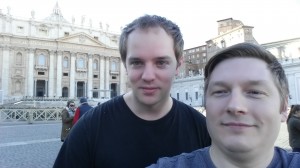 Andrew Bauer, Senior Global Mobility Advisor, Bristol Operations Center-EMEA:  My family went to Rome in February last year. Weather was absolutely fantastic, as you can see from the pictures. The architecture is breath-taking, and the pictures do not do it justice. I completely underestimated how big the Colosseum was, and it really makes you think what people went through back when it was used in Ancient Rome.

There are so many fountains there as well. We ate at a restaurant called the Tre Scalini which was in Piazza Navona. They were actually filming James Bond: Spectre at the time we were there. They had a truck with about 5 identical Aston Martins (see photo), which was quite fun to see.

For more information on Rome: